Astaxanthin Supports the Health of Your Pet Astaxanthin is a naturally occurring red pigment, produced by algae, belonging to a group of chemicals called carotenoids. It occurs in certain marine plants and animals and is the reason for the pink-red color in salmon. It is not produced by the human body; instead, levels of astaxanthin in your diet are dependent on the frequency of ingesting plants and animals with high levels of carotenoids, such as salmon. Astaxanthin is also found in flamingos, shrimp, and crab (to name a few).

Astaxanthin, sometimes called the “king of the carotenoids” is an extremely powerful antioxidant. Both humans and pets can experience long-term health benefits by adding an astaxanthin supplement to their diet. Some known benefits include joint health, eye health, reduction of inflammation, and boosting of the immune system to combat against things as deadly as cancer and as common as allergies.

Why is Astaxanthin Such a Powerful Supplement?

Research has shown that Astaxanthin – in its natural state – contains 500 times more potency than Vitamin E. Its antioxidant strength is up to 6,000 times more potent than vitamin C and 800 times stronger than Coenzyme Q10 (or CoQ10), a nutrient that is produced naturally in our bodies. Additionally, Valensa, a producer of Astaxanthin, states “Astaxanthin, especially when combined with Omega-3 oils, has a vast body of scientific evidence supporting benefit for cardiovascular health.”

Why Does my Pet Need Astaxanthin: A Non-technical Explanation

Like humans, every day a pet is exposed to free radicals (some occur naturally, and some do not). Free radicals are linked to both premature aging in pets and life-threatening diseases such as cancer. The radicals can buildup and create a stress in our bodies known as oxidative stress. While exposure to free radicals is normal, they are maintained with antioxidants either as a supplement or through dietary consumption.  As your pet ages, their ability to produce antioxidants on their own decreases, resulting in a buildup of those nasty free radicals mentioned previously. Supplementing your pet’s nutrition with the powerful antioxidant, Astaxanthin, can greatly reduce the effects of these free radicals as they age.

How Do I Get Astaxanthin for my Pet Without Feeding Them a Flamingo?

Existing studies demonstrate the importance of antioxidants in the diet of humans, and more recently branching out to the benefits to animals, most specific to pets. Wild salmon on average contains about 0.5-1.25 mg of astaxanthin per 200 g salmon (Rufer et al. 2008). As mentioned above, this supplement combined with Omega-3 oils found in fish oil, has the highest benefit towards overall cardiovascular health.

Benefits of Astaxanthin for Your Dog or Cat

As a powerful antioxidant, astaxanthin can help reduce oxidative stress on the joints, membranes, brain cells, eyes, liver, and heart. These antioxidants have been shown to boost the immune system in animals and therefore can make your pet less prone to infections. This supplement may have the ability to treat cataracts by reducing oxidative stress on the lens and has been shown to protect pets against allergies.

The benefits of Omega-3’s found in fish oil are fairly well known and mostly undisputed. The benefits of Omega-3’s coupled with natural occurring Astaxanthin is less known, but equally important, especially for your pet. Combining these two supplements creates a powerful force to combat different ailments that come with breed, age, and/or predisposition. As an important member of the family, feed your dog or cat Life Line Pet’s Omega Fish and Hemp Seed Oil to ensure they live a happy, healthy life. 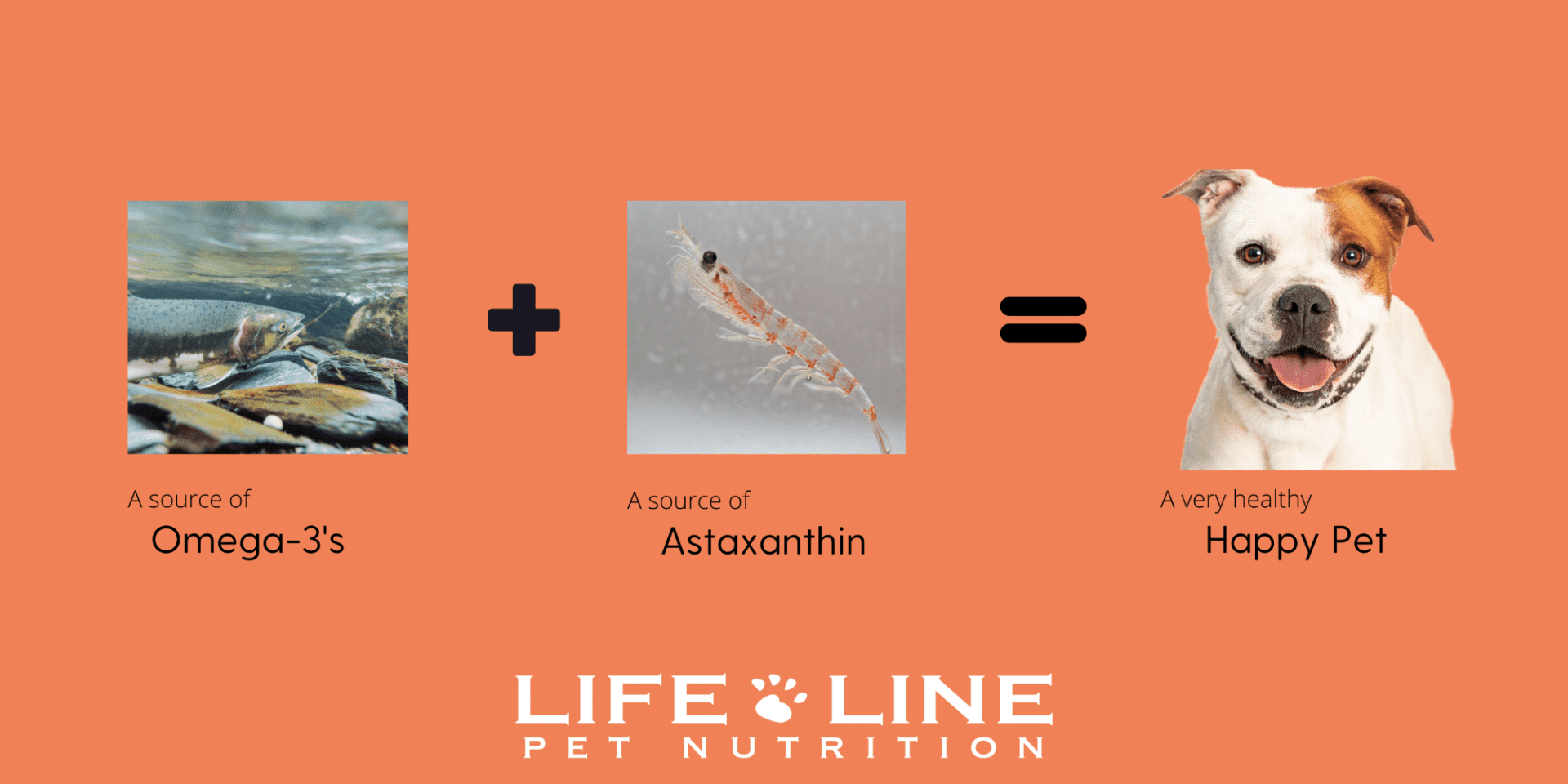 Join our newsletter to be the first to learn about new products or industry announcements.